Three Card Brag is a card game which is often played for money or other predetermined stakes by between two and eight players and is part of the bluffing family of card games. By ‘bluffing’ card games we mean games which you can win with an inferior strength hand by convincing your opponents that you have a stronger hand, therefore forcing them to fold. 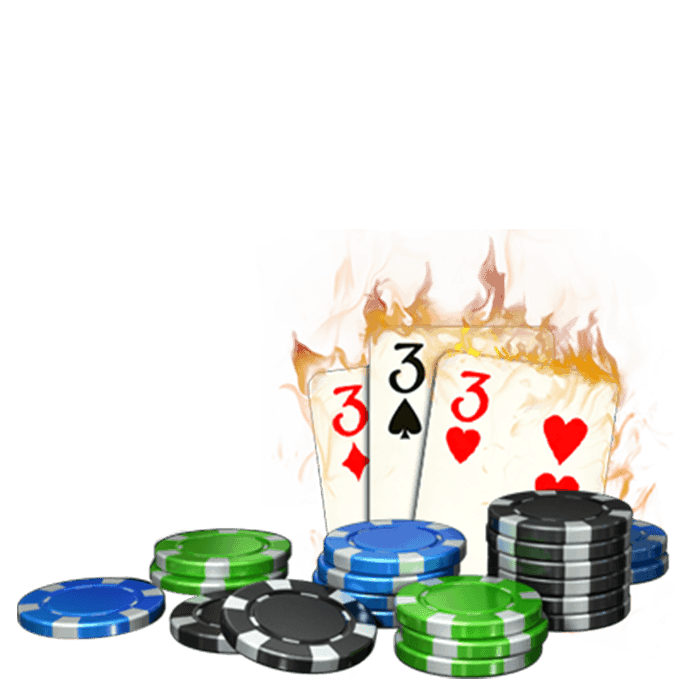 As with most card games, the most important thing to remember when playing a game of 3 Card Brag is the hand rankings. The three Card Brag hand rankings are as follows:

A prial is 3 cards of the same value with the strongest prial being 3’s followed by Aces, then Kings, Queens, Jacks etc with a prial of 2’s being the lowest value prial.

A flush is 3 non-consecutive cards which are of the same suit. If two players show a flush the value of the first card, then the second card and finally the third card (if necessary) are used to determine a winner. All suits are valued the same.

A high card is simply three cards which cannot be used to make any of the above hands. If two players show a high card the value of the first card, then the second card and finally the third card (if necessary) are used to determine a winner. All suits are valued the same.

At the start of a game of 3 Card Brag all players must cut the deck in order to establish who will deal first. Once a dealer has been decided they must shuffle the deck then deal the cards face down one at a time in a clockwise direction until all players have 3 cards each.

If all but one player folds their hand the remaining player wins the pot unchallenged but if any player makes a bet all other players who want to stay in the hand must also wager a bet. In certain variants of 3 Card Brag there are a predetermined number of times the betting can go around the table during the first round of betting.

Following this first round of betting there would then be a draw phase where all remaining players in the hand (starting with the player to the left of the dealer) have the option to exchange any number of their original cards for new cards off the top of the deck. Following the draw phase another round of betting takes place. Once there are just two players left battling it out for the pot another option becomes available.

Along with the ability to bet or fold players can also ‘see’ their opponent’s hand. To see an opponent’s hand a player must pay double the previous bet. However it is not possible to see the hand of a player who is playing blind. You can only bet against them or fold. Once a player pays to see their opponent the other player must turn over their cards and reveal their hand. If the player who has paid to see has the stronger hand they can turn over their own cards and take the pot but if their hand is equal or weaker than their opponents they can simply fold their hand and return the cards to the bottom of the deck without the other players at the table being able to see which cards they have just folded.

At the end of each hand the cards which have been used are simply placed at the bottom of the deck and the next hand is dealt straight off the top, without the deck being shuffled. The only time that the deck is shuffled after the start of the game is if a prial is shown to win the hand. If this is the case the dealer shuffles the deck then, as would normally happen at the end of the hand, the deck is passed to the player on the dealer’s left and the next hand is dealt.